It’s long been suggested that the presence of plus sized models was good for the consumer and in turn, good for business. A new study published by Florida State University researchers suggests that there is some truth to the belief that the increased visibility of plus size models has a positive outcome on those who view them.

The study provided insight about a couple of things. First, the idea that women are more likely to have a lasting impression of models that aren’t thin. Second, there was a positive psychological effect as a result of viewing larger and plus size models. The study asked the participants to respond to images of models of various sizes and found that plus size models left the subjects more satisfied with their own bodies, were less likely to make negative comparisons about their own bodies and were more likely to remember the plus size and average sized models.

The researchers drew the conclusion that body positivity has a clear positive outcome and suggests that it could be a useful marketing tool and smart strategy for those that produce media to employ plus size models. This outcome does make sense, but the study itself does leave room for a few questions.

Positive Reinforcements in the Form of Plus Size Models

Now that we’ve got the studies’ explanation and findings out of the way, let’s get real and consider a few things. My first issue is the nature of the sample. The study selected 49 individuals who all indicated they’d like to lose weight. There was no mention of the subjects’ race, clothing size or body shape. In theory, one could suggest that a racially diverse sample of larger plus size women might not respond as positively, given that the plus size modeling industry as a whole has a long way to go with regard to diversity on multiple fronts.

For starters, there’s a huge disconnect between the size of most working plus size models and the size of actual plus size people. On top of that, the plus size modeling industry has become less racially diverse in recent years. I also worry about the idea that one unattainable ideal (the fantasy of being thin) has been replaced by another equally unattainable ideal. Not all plus size women are size 12 hourglass or pear shapes with a flat tummy and I believe that’s the message frequently pushed by advertising.

Until someone takes the opportunity to provide more diverse imagery, the idea about what’s aspirational will never change. Finally, the positive response could be tempered by a sample population of women who explicitly subscribe to an intersectional fat positive outlook, or at the very least happy with their appearance and disinterested in weight loss, in my opinion, tend to rightly be more critical and conscious about representation in media and representation.

I can’t help but feel like most of the people in the small sample for this study are not actually plus size, but rather fall in the same size range as many plus size models.

My second concern lies with the suggestion that body positivity is nothing more a wise marketing strategy.

While it is definitely positive to see increased representation for plus size people, it is concerning to suggest that corporate-led initiatives as they are executed now are what’s needed to have a lasting and positive on all plus size folks. For me, a lot of the time, it feels that brands who use influencers who are not plus size models are doing so as a reaction to vocal online criticism.

I’m not too cynical to believe there aren’t any brands who thoughtfully include their customers in brand imagery (Eloquii and Re/Dress are great examples of that), but it has to feel sincere and authentic to actually resonate with the plus size customer. Previous attempts at attention grabbing branding to celebrate “plus size” bodies (I’m not naming names today because I’m being nice) have felt deeply out of touch with the actual plus size woman.

While companies have no moral obligation to consumers, it’s unethical for brands to use half-assed interpretations of a real grassroots movement.

Ultimately, I think these findings are interesting but inconclusive, given the circumstances, but my Debbie Downer tendencies are well documented. It would be great to see this study done on a larger scale with more depth and background about the nature of the sample. You can read more about it here and you can read the whole study online here.

We’d love to know what you think! Do plus size models have a meaningful impact on you? What sort of representation makes you feel good? Let me know your thoughts?

One dope woman/mom/wife/entrepreneur learning to conquer the world one cute outfit at a time. 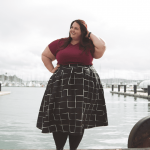